After I was discharged from the Marine Corps, my first mother-in-law asked me what would be a prescient question.

“Don’t strive to be a writer, write.”

It would take years before I finally put pen to paper, first writing poetry in the 1990s. Then in 2018, I saw a Facebook post saying the MilSpeak Foundation was hosting a Women Warriors Writing Workshop weekend at Queens University of Charlotte in North Carolina. I only had to pay for my room and transportation.

The weekend was transformative.

A Friday night welcome reception with Open Mic kicked things off. Several women were published authors, and many others were further along their writing journeys than I was. It was intimidating. And inspiring.

The weekend was filled with keynotes, break out sessions, and on Sunday a small-group workshop. Participants were asked to bring five copies of a work-in-progress, whether it be fiction, memoir, poetry, or an article. I went back to my room to write something so I could participate.

I could not write. I was so hung up on wanting it to be perfect that I couldn’t get any words out of my head.

Sunday morning I listened in awe while other brave writers shared their stories. I vowed one day I would too.

It’s been three years since that weekend spent in the company of badass women warrior writers. Although I didn’t write anything myself, I consider it the beginning of my writing journey because of the writing friendships I made and the inspiration I received…and the adventure continues.

For the past two years, I’ve dreaded February with its deep Winter chill and memories of loved ones passed. This year will be different, I thought as a booked a Corporeal Writing workshop in Portland, Oregon. I’d never been to Portland, my memoir was in a stuck place, and the workshop was being facilitated by two memoir writers I admire, Pam Houston and Stephanie Land.

I signed up for the workshop, booked a flight to arrive two days early to allow for sightseeing, and reserved a room at a hotel in Downtown Portland. I was ready for an adventure and to take the month back from grief’s grip.

The flight left Detroit later than scheduled, so when we landed in Seattle, I had to run from one end of the terminal, catch a tube, then run to the other. Breathless, I caught my connecting flight just before the doors closed. Once I arrived in Portland, I could hail a Lyft for around $30 or take public transportation (the MAX) for $2.50 directly from the airport to Downtown. I figured the trip cost enough and I’d taken public transport in DC, so surely I could navigate the MAX.

The ride to Downtown Portland was about 35 minutes. Sitting directly across from me was a middle-aged couple that looked uncomfortable with public transportation and distrustful of any characters they might run into. They tried to appear casual but her body was pressed up against the wall and her husband sat with his hand on her thigh. As people walked by, she would tense and his grip would tighten. They never met my eyes, keeping them averted to the floor. I recognized that tension, that stress, that woman…I used to be her, afraid to venture out of my comfort zone.

Upon arriving downtown, I checked into The Society Hotel room, dropped my bag, then took the MAX to meet my cousin. Tim has lived in Portland for 30 years, and we couldn’t remember the last time we saw each other. It was great to catch up and re-connect again.

First thing Friday, I had to see the massive bookstore I’d read so much about. Powell’s City of Books didn’t disappoint with three stories, nine different levels arranged by topic, and one million books under the roof. It was cool to see my story Semper Fi, Sister on the shelf and representing in Chicken Soup for the Soul: Running For Good.

When talking to a staff member, I commented that I had traveled with a small suitcase and had no room for more books.

“That would be great, but I don’t have time to look at everything I want now.” This was sightseeing day and my Powell’s visit was a recon mission. I had places to go and things to see.

“We’ll hold your books for three days. When are you leaving?”

“Monday. So wait. You can hold these two books, I can come back and add to stack…then Sunday I can pay and you’ll ship them home for me?”

It was a brilliant marketing strategy that I eagerly took advantage of over the next three days. I gave them my books to hold then spent the rest of Friday roaming Downtown Portland. In my research of things to do, I was excited to see the “Walk of Heroines: Honoring the Women Who Have Illuminated Our Lives…”at Oregon State University. Although the garden was underwhelming (not surprising this time of year), my favorite quote was from Dorothy Allison in 1992 who said, “Write the story that you were always afraid to tell. I swear to you there is magic in it.” So I’m finding out.

On the way back to the hotel that evening, I came across “Voodoo Doughnuts”, known for their crazy combinations and decadent pasteries. Though I didn’t try Maple Bacon, Voodoo Bubble, or Oreo-topped Dirt, the apple fritter was delectable. The lines out their door are a testament to Voodoo’s popularity.

Finally, workshop time with Pam and Stephanie arrived. Among the many things I learned is that my memoir doesn’t have to be linear, it doesn’t have to follow the traditional hero’s journey, and it can be written in any form I damn well want it to be. That felt liberating.

My long weekend adventure was over all too quickly. I’m still processing what I learned at the workshop as well as my affinity to The Society Hotel.

What I remember most about the trip were the connections I made with my classmates and the serendipitous conversations I had with the people during my travels: Christian, the Army officer traveling home for his sister’s wedding; Domi, co-founder of Corporeal Writing who witnessed my embarrasing faceplant on my recon visit; the couple from Sacramento I met in the Voodoo Doughnut line who commented they’d visited Powell’s but didn’t personally know a writer until me; Tom, the pony-tailed nightshift history buff and dayshift manger Anthony who filled me in on the fascinating history of The Society Hotel; Doug, the Portland Airport blues guitarist who soothes frazzled traveler nerves; and the Michigan organic seed growing couple traveling to a conference. Each and every person I met helped heal my February funk.

I thought my Portland trip was about reclaiming the month from grief, but in the end it was a reminder to live a connected life with those around me. And to celebrate my parents…I am their living legacy. 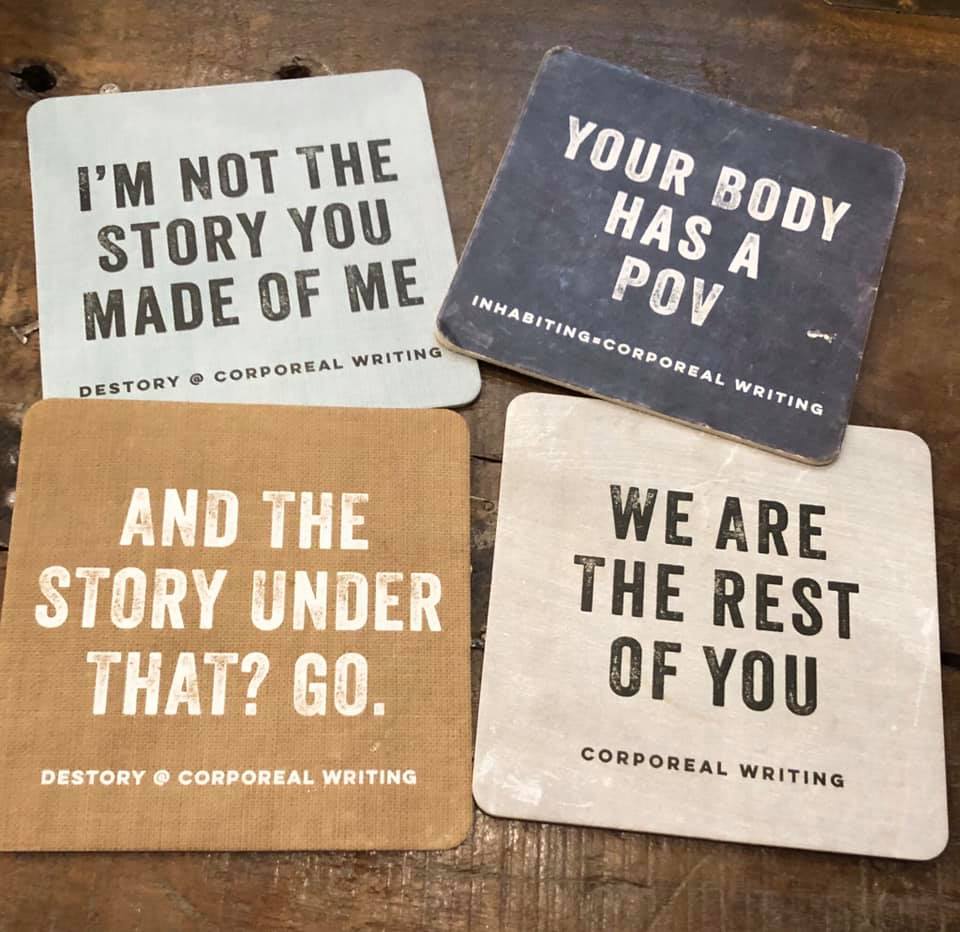 Have you ever had that feeling of oh crap, why did I say that? I attended a Corporeal Writing workshop last weekend where we had to introduce ourselves then say what we always wanted to write and what we are experts in.

After the facilitators introduced themselves, the classmember next to me started and before I could figure out what I was going to say, it was my turn.

What the? Really? Where the hell did that come from? I was there to get some clarity in writing my beast of a memoir. Then I got wrapped around axle on the word “expert.”

“I don’t really think I’m an expert in anything, I’m kind of a jack of all trades. I can’t identify with being an expert.”

As I listened to the rest of my classmates talk about writing from their place of pain, I felt small.

Truth be told, some of my earliest writing was listening to songs a million times and writing down the lyrics. This was back in the day before they put lyrics on album liners, and way back before you could search for them on the internet. I had a whole notebook of Jim Croce, John Denver, and Elvis Presley lyrics. Music speaks to me so maybe I can relate to writing song lyrics. But is it the thing I most want to write? No, I want to finish this damn memoir.

On to the second thing that stumped me.

I could not in any way identify with the word expert. I once considered changing careers to teach, but didn’t make the leap because I couldn’t imagine standing in front of a class not knowing everything. That perfectionism seems ludicrious looking back on it now. I’m a recovering perfectionist but find myself occasionally relapsing into old habits like a comfortable pair of slippers.

The next time I’m asked to introduce myself, telling the one thing I want to write and what I’m an expert in, I’ll say: “Hi, I’m Deb. I’d really like to finish my memoir of having a mentally ill mother so others in similar situations know they’re not alone…and I can parallel park my car like a boss.”