In my first blog post, I alluded to my 1990s writing journey. As a professional woman, a mom of an adolescent, and a busy wife, I was working through a lot at the time. I became extraordinarily frustrated when the creative well dried up no matter what I tried. I’ve come to believe the universe was telling me I wasn’t ready.

I spent 31 years being married to two different men. I divorced for the first time after four years, taking back my birth name Sinness. I felt strongly about it at the time, and I didn’t want to be reminded of that failure. After 27 years of marriage to a terrific guy, sharing a daughter, and establishing myself professionally with his surname and my birth name as my middle name, the decision to retain his surname was easy. I had been known as my married name longer than my birth name. 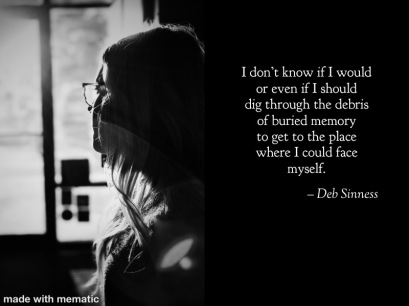 After a third marriage, this time to a woman, we explored changing both our last names to one we could share. After many philosophical ‘why do women change their surname’ discussions, we decided to retain our own names.

After I began writing my memoir in November, I faced the dilemma of whether I should consider a pseudonym or pen name. When my partner suggested using my birth name, I was resistant. Why? I loved my recently passed father dearly. Why was I opposed to using his surname?

I brought up the issue to my writing coach Lauren Sapala, the author of “The INFJ Writer”, and she nailed the reason…to reclaim my birth name. It makes perfect sense. I did not know who I was during my adolescence, early adult years, or even when I wrote one of my first poems in the 1990s. It’s time to make peace with my past and reclaim the surname I was given at birth, Sinness.